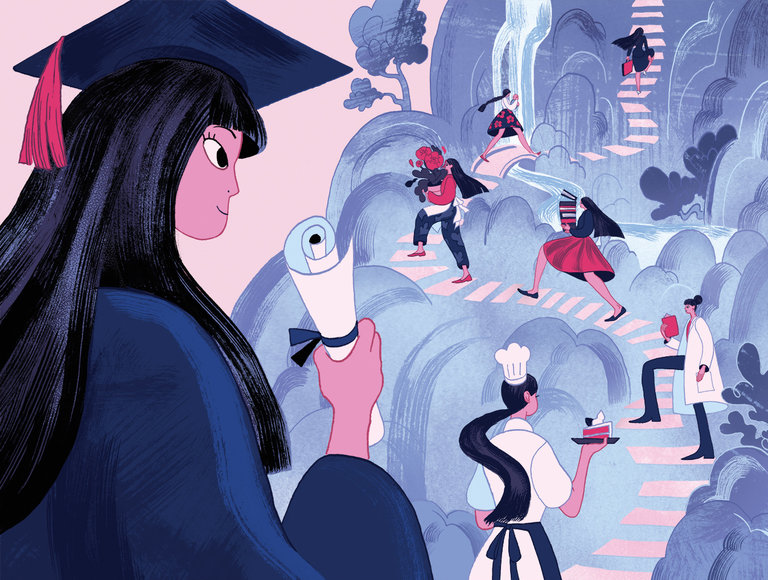 For all their grandeur and euphoria, graduation ceremonies can be harrowing. Until that momentous day, you’re a student whose job is to do what your teacher asks. Now you have to ask things of yourself — but what?

If you’re relying on a commencement speaker to set your compass, you may still be confused at day’s end. In my experience, it’s common to hear “Follow your passion” from the podium. This is great counsel if, in fact, you know what that passion is. But what if you don’t?

Young graduates might imagine that discovering your passion happens the way it does in a movie: with a flash of insight and a trumpet blast. Before that flash, you were struggling to find yourself, and in the next moment, you know exactly who you were meant to be.

As a psychologist who studies world-class achievers, I can say the reality of following your passion is not very romantic. It takes time to develop a direction that feels so in-the-bones right that you never want to veer from it.

Thus, my advice to young graduates is not to “follow your passion” but rather, to “foster your passion.” Here are three suggestions for doing so.

Move toward what interests you.

Don’t panic if you can’t think of a career path that’s a perfect fit. In large part, this is because interests are not just discovered, they’re developed. Scientists have learned that the sort of enduring fascination that commencement speakers like to praise usually takes time and experience to bloom fully.

For instance, when she graduated from Smith College, Julia Child had no idea that she would fall in love with French cuisine in her late 30s. She had no inkling that writing cookbooks and teaching on television would one day become her calling.

A good-enough fit is a more reasonable aim than a perfect one. Consider your first job as an opportunity to begin an unpredictable, inefficient trial-and-error process. The violist Roberto Díaz told me he didn’t know he’d love the viola before he tried it, and his tepid reaction to the violin could not have foretold the lifelong love affair he has had with the ever-so-slightly-larger viola.

As I said to one young man who, on the cusp of his first real job, was paralyzed by indecision: “Don’t overthink it. Move in the direction of something that feels better than worse.”

People are hard-wired not only to gratify their personal desires but also to care for others. So rather than ask, “What do I want to be when I grow up?” ask, “In what way do I wish the world were different? What problem can I help solve?” This puts the focus where it should be — on how you can serve other people.

Analyzing data I’ve collected on thousands of American adults, I’ve found that those who have an enduring passion answer affirmatively to statements like, “In choosing what to do, I always take into account whether it will benefit other people” and “I have a responsibility to make the world a better place.”

Once you’ve thought of what or whom you care about most, write it down. Psychologists have found that asking people to reflect in writing on their core values has miraculous effects on motivation. Because these are often the values you will be remembered for — what David Brooks calls “eulogy virtues” — you might consider writing a paragraph about what you would like people to say about you after you’ve drawn your last breath. It sounds grim, but perhaps the perspective will help you figure out what to do while you have the time to do it.

Self-oriented motives like interest and other-oriented motives like altruism are not mutually exclusive. In fact, personal interest and self-transcendent purpose are the dual engines of intrinsic motivation. In combination, they’re more powerful than alone. In one study, municipal firefighters who expressed interest in their work and concern for the welfare of the public averaged more than 50 percent more overtime hours than others.

Speaking for myself, psychology attracts my attention more than any other topic, but what gets me out of bed in the morning isn’t just curiosity. I enjoy my work, and at the same time I believe that doing it well can contribute to the well-being of other people.

Your first job is unlikely to be your last. Once you figure out your next step, what should you do?

I confess it took a fair bit of job swapping before I knew that psychological research would become my long-term career. But in each of those jobs, I picked up knowledge and skills that I was able to weave into my current work.

Also consider the commitment you made when you accepted a job. Did you pledge to stay for a year? Did you promise two weeks’ notice before leaving? Try to keep your word. While personal growth is important, it is imperative to act like the professional adult you are.

Work as hard on your last day as on your first. No matter where you go next, you have an opportunity to make the most of where you are now.

Angela Duckworth is the founder and scientific director of Character Lab and the author of “Grit: The Power of Passion and Perseverance” (Scribner).